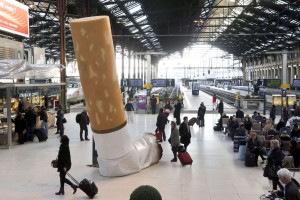 To go with “Lifestyle-France-Paris-travel,FEATURE” by Samir Tounsi
(FILES) This file picture taken on December 4, 2012 shows people passing by a giant mock-up discarded cigarette displayed on the ground at the Gare de Lyon railway station in Paris, as part of a public-awareness campaign launched by France’s national rail company SNCF to shed light on commuters’ disrespectful behaviour. The “City of Light” may draw more tourists than most world capitals, but Paris less than sparkles to the legions of visitors shocked to find its residents can be rude, brusque and snobbish. AFP PHOTO / FILES / PIERRE VERDY